Skip to content
Previous
Former mayor of Randers checks in

On a Monday in March, our CEO, Søren Rasmussen, received a nice visit from the former mayor of Randers – Member of Parliament – Spokesman of Foreign Affairs for Venstre – Michael Aastrup Jensen. He stopped by to take a closer look at the green solutions of the future.

Here, Michael Aastrup Jensen got a good insight and a dialogue with Søren about how Nordhavn Power Solutions will approach the green transition. At the same time, he saw the new methanol engine under operating conditions in our test center. It was also the engine that was showcased in the test center during our open house event.

Michael was impressed with the methanol engine, but also with the possibilities that methanol provides as fuel.

The methanol engine is the first step in Søren’s plan on the road to a green transition. We will continuously announce the next phases of the green transition at Nordhavn Power Solutions.

Among other things, we launched shortly before our open house that it is now possible to have a methanol-powered generator container solution for both marine and industrial. 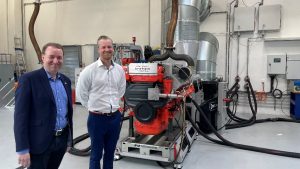 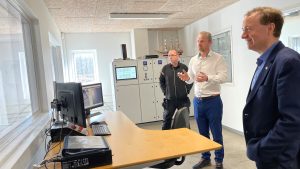