The new Scania marine engine range is based on an exhaust gas aftertreatment system developed in-house, which reduces the emissions of nitrogen oxides. This represents the cutting-edge environmental aspect of Scania’s marine solutions.

In anticipation of a wider adoption of the tough new emissions demands for marine engines that were introduced earlier this year by the International Maritime Organisation, Scania already has tried and tested new marine engine solutions that comply with the new limits.

Under the IMO Tier III regulations that took effect in January, the limit for nitrogen oxide (NOx) emissions ranges from 1.96 to 3.4 g/kWh, depending on the engine’s maximum operating speed. This new limit is a significant reduction from the Tier II range of 7.7 to 14.4 g/kWh.

However, although the regulations do not yet apply outside of the North American and US Caribbean Emission Control Areas, Scania has already prepared itself for the eventuality of the changes taking effect in the wider world.

Scania has considerable experience of exhaust gas aftertreatment systems. The manufacturer’s Selective Catalytic Reduction (SCR) system is a tried and tested technology that has been used both in engines for trucks and industrial applications. And the NOx limit for Euro 6 trucks and Tier 4/Stage IV industrial applications is 0.40 g/kWh, comfortably within the new emissions requirements.

To achieve an approved installation for marine applications, Scania offers installation recommendations on the dimensions and lengths of piping, the cables needed, and the parts needed for the aftertreatment system. This includes the SCR catalyst, a customised exhaust system, an evaporator for mixing urea and exhaust gas, and a three-way safety valve. The solution is available for Scania’s 13- and 16-litre marine engines.

Scania’s Tier III-compliant engines have the same footprint as the current engine range. So when upgrading from an existing Scania installation, there’s no need to rebuild the engine bed. 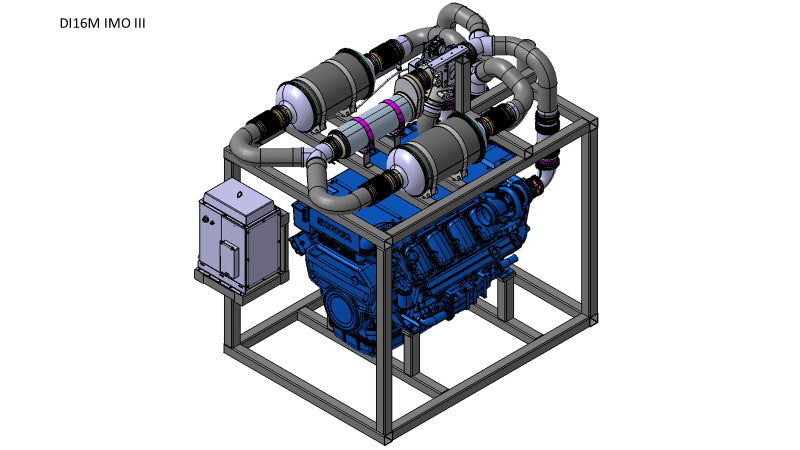